Led by interim Coach Bal Gopal Maharjan, Nepal desperately needed a bounce back win after  underperforming at the recently concluded Asian Games in Indonesia.  A consistent and competitive performance was imperative for Nepal to generate early  momentum and build confidence.

They had to set the tone against Pakistan, avoid defeat and get off to a perfect start.  Unfortunately, it did not materialize as they fell well short of expectations.  The 1-2 defeat is a big blow to Nepal’s quest for South Asian Football Federation Championship (SAFFC) title.

Nepal’s offense did come up with a much improved performance, launching forays,  maneuvering moves and creating scoring chances, but they lacked the execution and finishing  touch.

Nepal, however, was found wanting in defense. In fact, defensive lapse in extra time cost them  the match. Pakistan did well to keep the opposition at bay despite intense pressure , especially in the  second half.  They were physically a stronger side with plenty of pace. They were dangerous in counter attacks.  Despite defeat, all is not lost for Nepal.

Coach Maharjan boys have two matches to make up for the loss, but it’s easier said than done.  One thing is very obvious they have put more pressure on themselves, and they have made this  task harder on themselves.  If Nepal continues to play sloppy, uninspiring and below-par football, I cannot see by any  stretch of the imagination how they are going to pull this off.

Nepal needs to regroup, regain focus and play with more conviction, effort and purpose.They have to throw everything at the opponents to get the desired outcome. As things stand now, there is no room for mediocrity. In the next match, Nepal takes on Bhutan, a team certainly not a pushover anymore. Though Nepal starts the match against Bhutan as the overwhelming favourites,there is no guarantee that they will win.

Gone are the days when Bhutan used to be a fragile, weak and uncompetitive side. Over the  years, they have improved a lot in every sphere of the game, and they have been steadily climbing the FIFA rankings. The players never give up attitude, aggression, enthusiasm and talent makes Bhutan a dangerous outfit.

As I see it, it is not going to be an easy match for Nepal. They will require a solid performance  to overcome Bhutan. It would be a huge mistake to underestimate or undermine the opponent.  That said, Nepal has a good chance to secure the desperately needed victory. The opportunity  should not be squandered, otherwise, their chances of qualifying to the knockout stage would diminish.

All I suggest is, just go out there, step up and play to your potential. The defense needs to  tighten up and the offense must up the ante, show more aggression, come up alive and not  waste scoring opportunities.

Along the same line, the midfielders who shoulder the bulk of load must play a pivotal role,getting more involved in the proceedings. 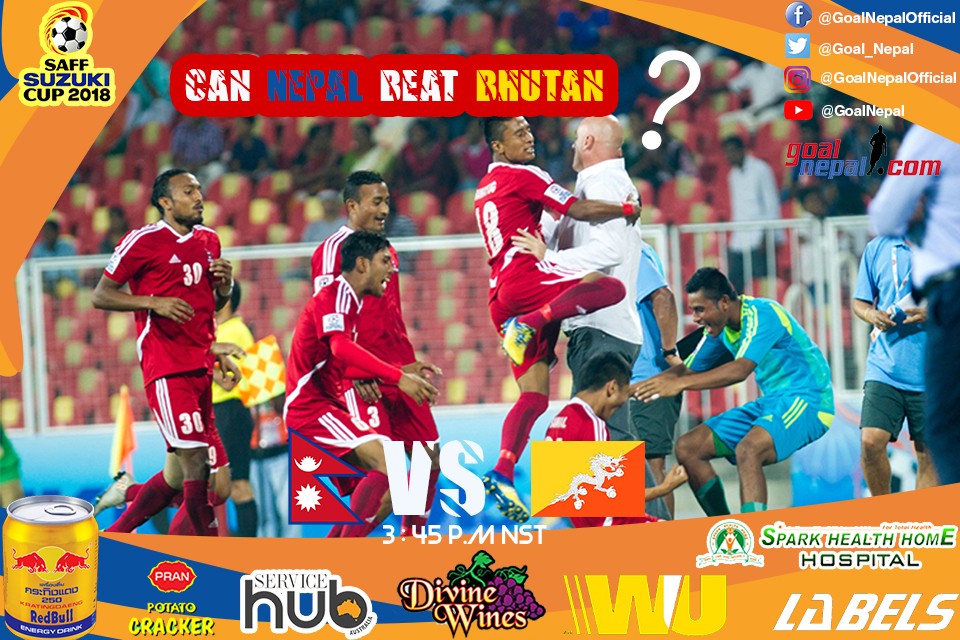